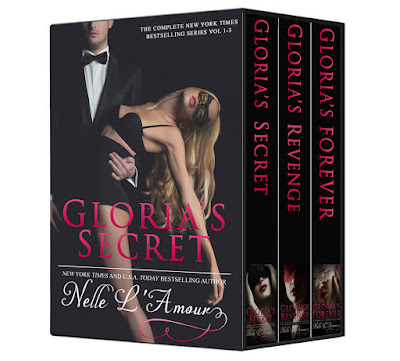 The New York Times bestselling series from the author of THAT MAN! Over 700 pages of steamy romance!

A man who has never heard the word "no," Jaime takes his creativity to the limit to make Gloria fall apart and fall for him. But major obstacles stand in the way—Gloria's Secret's ruthless Chairman, who covets Gloria and is out to destroy Jaime, as well as his manipulative sexpot daughter, who wants both Gloria's job and her hot, new love. Complicating matters further, Gloria harbors a dark, horrific secret, that when exposed, will shatter both her empire and her life. Will she be able to have it all or will the walls come tumbling down? 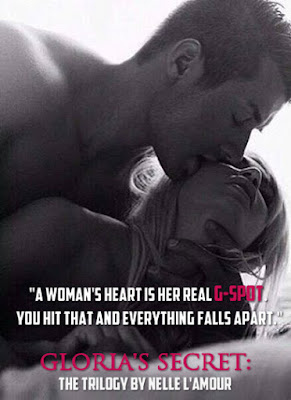 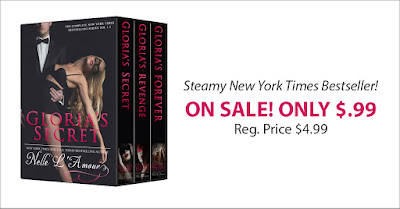 I jolted. Under the table, I felt something slide under my dress and snake up my thigh-high silk stocking past my garters to my middle. Holy fuck! It was his bare foot, and it was running circles over my mound.

“Ah, Gloria, your pussy feels so hot and wet beneath those lace panties of yours.” He paused. “They are powder blue, right?” he asked with a roguish grin.

“Yes,” I gasped. His foot was now rubbing hard against my clit. I was getting more feverish by the second as he pushed me toward the edge. My fingers clutched the corners of the white-linen covered table.

“I think you should stop,” I said between clenched teeth.

“There’s a difference between I think and I want. Do you want me to stop?”

Oh, God! This man got me. He continued massaging, adding vertical strokes up and down my soaking wet cleft. The pleasure and pressure were so intense I thought I would yelp. I dug my fingernails into the table and chewed my lip, trying hard not to scream. Jesus, how would I look if I broke loose?

Jaime shot me a cocky, confident smile. I wanted to rip it off his face with my teeth.

“Gloria, you want to lose control. Do it!” he commanded as he jabbed his big toe into my pussy.

I exploded. Ripples of ecstasy swept through me. It took all my willpower not to scream out. “Oh, God!” I moaned under my breath.

His satisfied eyes bore into me. “Now, it’s time to move onto the steamy artichoke, another natural aphrodisiac.”

Barely recovered from my mind-blowing orgasm, I eyed the thistle-leafed delicacy sitting in the middle of the table and jolted again. Beneath the table, a hand clutched my calf. Fuck! My turn to play footsy? My already rapid heartbeat accelerated as he maneuvered off my silver sandal and placed my foot on the mound between his legs. His steamy delicacy. The warmth of his swell beneath my sole intensified the throbbing between my inner thighs.

He began rubbing my foot up and down his arousal. I could feel it harden and swell beneath my arch. He hissed. There was nothing I could do with him holding my foot prisoner but wait anxiously for him to come.

And then the movements below ceased. My foot rested on his erection. The sole of my foot was burning.

His glimmering eyes burned a hole in mine. “I’m not going to force you make me come. That would be too much for me here. Too embarrassing. I just want to remind you what you do to me, my beautiful angel.”

Oh my God. He called me “angel.” His beautiful angel. My heart was melting like the candle on the table. How could one man, one word, do this to me?

Still holding my foot on his length, he peeled off an outer leaf of the large artichoke with his spare hand and dipped the tender edge into the side of melted butter. He raised the leaf, dripping with butter, to my lips. My breath hitched.

I clenched my teeth around the soft buttery artichoke meat and sucked it off the leaf. He discarded the remains onto his plate. With his index finger, he gently wiped off the little bit of butter that had fallen onto my lower lip. He inserted his butter-coated finger into his mouth and moaned.

“Now, you feed me a buttery leaf.”

I peeled off a large outer leaf and repeated his action.

We continued this back and forth consumption of the artichoke until we were down to the heart.

“The heart is the very best part,” he proclaimed, his eyes now hooded.

I simply nodded, my foot still resting upon his hard, hot cock. I was in a trance. My head was spinning, and my blood was looping through my body like a rollercoaster. Hold on, Gloria

“Did you know that a woman’s heart is her real G-spot? You hit that and everything comes apart.”

Trembling, I watched as he stabbed his fork into the
Posted by Night and Day Book Blog at 7:00 AM