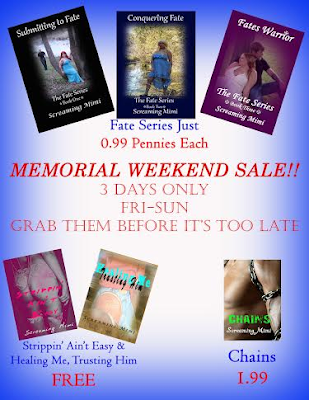 When millionaire Justin Wayne finds himself in need of help, he figured his girlfriend would step up and be there for him; instead he must turn to his maid for it.

Dava Flores is a single mother, studying for her degree, just trying to make a life for her and her son, but when she sees Justin in trouble she doesn’t even hesitate to lend him a hand.

Justin isn’t used to someone helping him out without expecting something in return, even his gold digging girlfriend.

Will Dava be able to help Justin break the chains his girlfriend has on him, or will Justin give into her demands to fire Dava, and give her more money?

Henry isn’t the white knight in shining armor; no he’s the highly trained former Army Ranger ready to leap out at his enemies from the cover of darkness. He’s been hurt before but that doesn’t stop him from caring for all those around him like family.

Elizabeth is headstrong and fiercely independent. She’s leery of any man willing to help her without an ulterior motive.

Can Henry conquer her heart and show her that good men still exist? Will Elizabeth be able to conquer her fears and let Henry in? Could fate be at it again?

Former Army Ranger Martin Damien has only ever been able to trust his battle buddies, everyone else has failed him. From his parents who sold him for drugs to the foster care system that didn’t protect him to the women who used him, they have failed him.

Even after Alexis’s prince charming turned out to be a toad in tin foil she still believes in happily ever after she just has to convince Martin it’s possible.  She’s stubborn, full of spirit, and willing to do whatever it takes to win the battle for his heart. When the past comes back to haunt her Martin is willing to do whatever it takes to protect, even if that means his own life.

Will her Warrior fight fate or will he submit to it?

Fate can be a cruel mistress or a naughty prankster but it rules us all in some form or another.

Logan finds himself at fates mercy when his fiancée leaves him at the altar for another man. Angered by the thought that he was willing to give up everything for "the one" only to have her toss him aside, he's determined not to let any woman make a fool of him again....ever. He chooses to take the honeymoon they were meant to go on, with the intentions of forgetting her forever. Walking into his hotel he finds Bella and something inside him shifts, but he won't accept it. No he's through with women and their wiles.

Bella hopes for a great future with her fiancé. But another betrayal makes her swear herself off all men. Two broken hearts, two strangers with the same goal, keeping their hearts locked from any feeling. Will fate make them both submit? Will they learn how to love again?

Healing Me, Trusting Him

How do you recover from a childhood built on lies and betrayal?

How does a Marine heal from battle scars?

Marie is a wounded soul who grew up in a house of lies and betrayals by those who were supposed to protect and love her. Will she be able to find the healing she needs on a ranch in Montana?

Duece has healed on the outside from his wounds, but now he needs to heal the scars on the inside. Can he find the strength to win Maries trust and heal them both?

Buy Links For Healing Me, Trusting Him

All Miranda wanted to do was bust the bad guy and get the hell out of dodge, or the strip club as the case may be. She’s used to using men and throwing them away, because happily ever after wasn’t in her horizon.

Stephan and Bruno have known each other since they were kids, they like to share, EVERYTHING. Are they willing the share the one woman who could become their weakness? Will they be able to complete their mission and still be together?