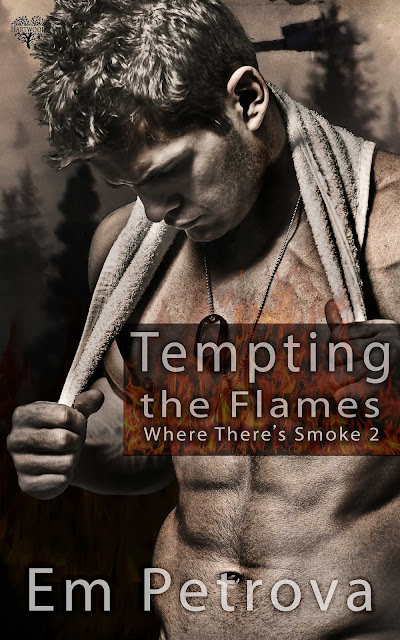 Where there’s smoke, Ryan is eager to jump into the flames.

Ryan, aka Blaze, is a California smokejumper whose motto is “grab life by the balls and hold on tight.” He refuses to accept defeat, and that’s why he fights the world’s biggest wildfires. He loves his job, and it’s even better with a certain quirky woman making a documentary about their team. Every time she’s around, Blaze has a hard time zipping his jumpsuit.

Scarlett is only interested in finishing this documentary for her dissertation. She isn’t into Blaze’s rugged good looks and crooked smile. The two of them are just buddies—who see each other naked, that is. Between his rough hands and heart of gold, Scarlett wonders how she will be able to walk away once she’s finished filming. But maybe she won’t need to.

When the smoke clears…

Do people fall in love after only a few days? Blaze’s idea might be crazy enough to work. When he says, “I bet you can’t handle a man like me forever,” Scarlett is head-over-heels enough to try. Which means a wild trip to the justice of the peace and a wedding dinner at IHOP is in order.

But now that the fire's died down and reality has hit, she doesn't want Blaze in the path of danger. Not when she had everything to lose. And Blaze damn well isn’t giving up the only thing he’s been passionate about. As they fight to build a life out of lust, will they be able to create something out of the ashes? 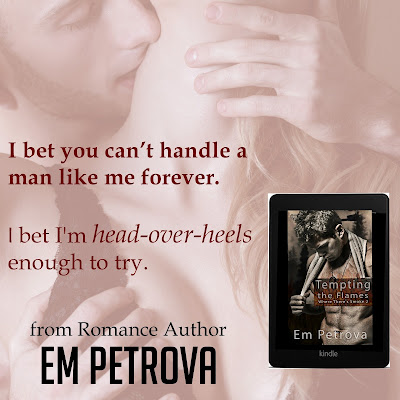 
Scarlett’s heart slammed so hard against her ribs that it robbed her of breath. Through the lens of her video camera, she focused on the little figures falling out of the sky.

“When are they opening their chutes?” Her voice sounded too nervous for her own ears. If she was going to film this documentary on the California Smokejumpers, she needed to put on her warrior girl bra and panties because she was going to need to toughen up. She had a month with a group of firefighters who jumped out of a plane with everything they needed strapped to their persons, and so far, she couldn’t even watch them jump without feeling dizzy.

At her side, Joe, the base camp manager for the team, shot her a wry smile. “They’ll deploy their chutes soon enough.”

Just then, several popped open and the small figures were tugged upward by air currents.

“Wow.” Scarlett smiled from behind her camera as she filmed them floating down, down, like dandelion fluff on the wind.

“Stand back along the edge here,” Joe instructed. “We’ll want to give them a big landing zone, though they’re often pretty accurate.”

“Do any ever land in the trees?” She glanced away from the lens in time to see the forty-something, rugged guy wince.

“Had two landing accidents last year. Not bad, but I’m hoping for a better track record this season. It’s why we’re practicing our jumps so often these days.”

“How do they steer themselves?”

“By moving the lines of their parachutes.”

Her palms began to sweat as a figure loomed closer and closer until his feet hit the ground.

“See how he’s got his knees together and bent? Makes for a softer landing,” Joe said as the guy rolled onto his side and came up grinning. He didn’t hesitate a moment before he started coiling in his parachute. In seconds he had it stuffed away and was pulling objects from his fire suit.

“These men and women need to be ready to hit the ground running.” Joe cupped his hand around his mouth and hollered to the others touching down on earth. “You’ve got only about a minute, jumpers! Haul ass if you don’t want toilet duty when we get back to base!”

Several huffs of laughter sounded, but Scarlett heard the threat in Joe’s tone. The manager was as serious as a heart attack when it came to his crew and running a tight ship. She’d spoken to him at length before persuading him to allow her to make this documentary for her dissertation.

She was a step away from receiving her doctorate in environmental sciences. The step seemed rather big to her, because it meant living, eating, and breathing smokejumpers for the next month. Before now, she’d believed she was prepared.

As the guys strode toward her and Joe, faces fierce with something she recognized as determination, more adrenaline hit her system.

Big guys and roped with muscle, judging by the rolling way they walked. She swallowed hard and forced herself not to take a step back.

She spent her days in the library. For fun she had geek-a-thons of Firefly and Harry Potter. She was far from her element out of doors, surrounded by men who harnessed the power of wildfires.

She glanced up, her gaze traveling what seemed like forever over powerful thighs, a broad chest, and thick shoulders. She stopped breathing altogether. Maybe the last time her heart had knocked, it had finally given out. Because surely she was looking at a god.
Or archangel. 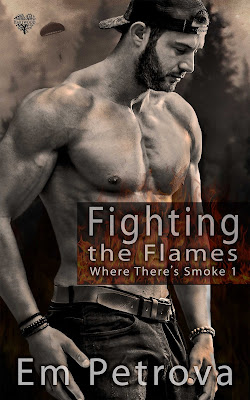 
Em Petrova was raised by hippies in the wilds of Pennsylvania but told her parents at the age of four she wanted to be a gypsy when she grew up. She has a soft spot for babies, puppies and 90s Grunge music and believes in Bigfoot and aliens. She started writing at the age of twelve and prides herself on making her characters larger than life and her sex scenes hotter than hot.

She burst into the world of publishing in 2010 after having five beautiful bambinos and figuring they were old enough to get their own snacks while she pounds away at the keys. In her not-so-spare time, she is fur-mommy to a Labradoodle named Daisy Hasselhoff and works as editor with USA Today and New York Times bestselling authors.