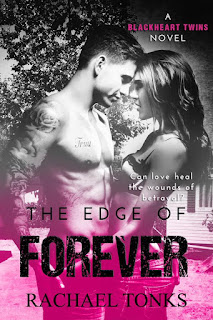 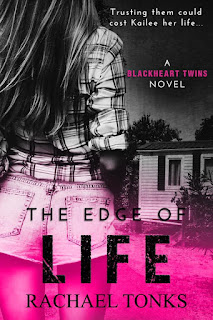 Notorious.
Dangerous.
Criminals.
Kailee's new neighbors are just that. They are also hot, tattooed identical twins. Identical in almost every way. She knows she should fear them, but she can't.
Ryder is explosive, always fighting for what he wants. He fears nothing. Except for Kailee.
Jax uses his mind instead of his fists to get ahead. He takes what he wants. Kailee included.
Fists will fly.
Blood will be shed.
Lives will be changed forever.

*The Edge of Forever BLURB*

Notorious
Dangerous
Criminals
When secrets are unveiled and Kailee finds herself caught in a war between the Blackheart twins, can she be saved before all is lost?
Her heart in tatters and her whole life balancing on a knife's edge, who can she trust in the twisted web of lies and deceit?
Kailee must hold on to her natural instincts of survival and endure the pain of loss and betrayal, fighting as she teeters on the edge of life.
Can love overcome and heal her shattered heart?
Will her savior get to her in time before it's too late?
Lives will be changed.
Bonds will be broken.
But who will find the edge of forever?

#BookwormPromotions
Posted by Night and Day Book Blog at 11:00 AM