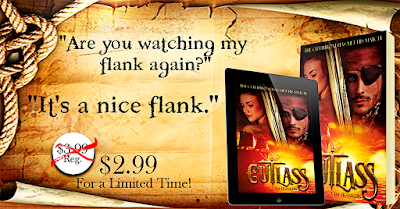 A quest for vengeance.

An attraction they both try to deny.

Convinced One-Eyed Jack Tremayne killed her father and stole his prized cutlass, Sarina Talbot sneaks aboard the pirate’s ship to exact her revenge. To her surprise, she’s met by a declaration of innocence and an offer of help. She doesn’t trust him, and he doesn’t trust anybody. But they need each other to catch the killer and beat their enemies to a hidden cache of Aztec gold.

They’re not the only treasure-seekers, however, and there’s a traitor in their midst.

Caught between Crown ships and enemy pirates, Sarina and Jack discover a prize greater than gold as their uneasy alliance leads them on the adventure of a lifetime.

<!-- the identifier in the following script tag can be a GR book id or an isbn
Posted by Night and Day Book Blog at 5:10 PM