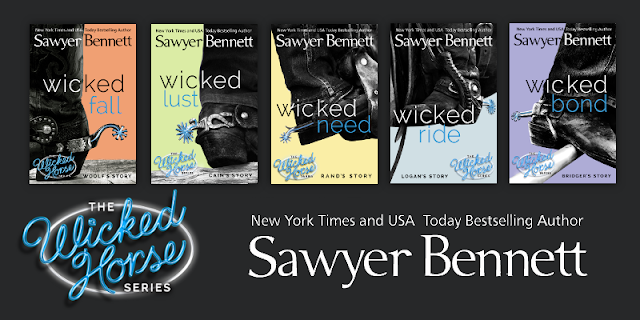 Never in your wildest dreams could you begin to imagine all the filthy and depraved things that go on inside The Wicked Horse. Step inside to make every one of your dirty fantasies come true.

Wicked Lust:
Cain Murphy is the head of security at The Wicked Horse, and while he takes his responsibilities seriously, he believes in the motto “work hard, play harder”. Looking to uncover the depravity behind The Wicked Horse, undercover reporter Sloane Preston is determined to find an inside connection and sets her sites on Cain. Will Sloane get her story, or will she find the biggest break of her life in Cain?

Wicked Need:
Former Olympic skier Rand Bishop has settled into life in Wyoming and his job as a Fantasy Maker at The Wicked Horse. Catherine Lyons Vaughn is trying to piece her life back together after finding herself destitute following the death of her husband. A longtime member of The Wicked Horse, Catherine finds herself under the caring, tattooed wing of Rand. Now all Catherine has to do is believe she deserves the chance.

Wicked Ride:
Logan McKay is running from his past, and has found some measure of solace passing his days working at The Wicked Horse as one of their Fantasy Makers. Auralie Foster and her virginity are being paraded around The Wicked Horse in search of the highest bidder. When Logan uncovers the truth about Auralie’s past, will he be able to move past it, or will she become his downfall?

Wicked Bond:
The co-founder of The Wicked Horse and an enigma to everyone he meets, Bridger Payne is utterly untouchable. Shrouded in secrets and pain, Bridger will give pleasure, but takes none for himself. When Maggie Waylon is dropped at his house, beaten and unconscious, Bridger is forced to face his demons. Will Maggie be able to help him break through the darkness, or will Bridger’s past prove to be too much for him to overcome?
Posted by Night and Day Book Blog at 2:00 PM