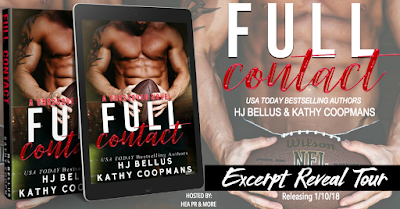 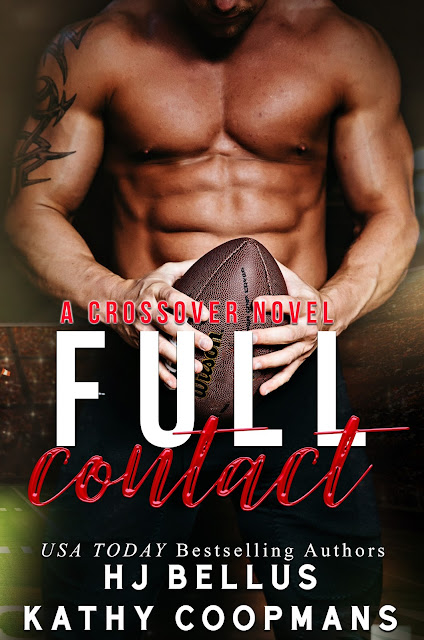 FULL CONTACT by HJ Bellus & Kathy Coopmans
TBR: http://bit.ly/FullContactTBR
Sports Romance
A mafia princess. The nation’s favorite football player. Can they make it work?
An unlikely matching of the stars.
The opposites had it all for one year.
Justice Bexley, the daughter of Cain and Calla leaders of The Diamond Syndicate, sacrificed true love to protect Liam. Her selfish action destroyed them both.
Liam Blake moved on with his prestigious career. However, his outlook on life was never the same. If his parents could fight for true love with a Pinky Promise he can keep moving forward. At least he tried convincing himself of that.
Some say true love has a way of finding its way back. Justice and Liam know better to believe. That’s up until the day they find themselves in a heated meeting.
She owns a new football team.
He’s coming back from an injury and thirsty to prove the nation wrong.
Years of pent-up anger and hatred may fuel an epic second chance love story or ruin both of them for good.
Find out in FULL CONTACT by HJ Bellus & Kathy Coopmans.
Pre-Order your copy: iTUNES | NOOK | KOBO 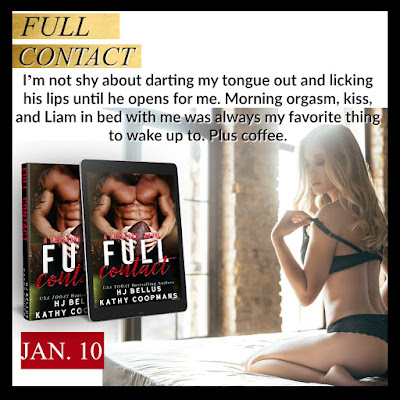 EXCERPT REVEAL
I’ve canceled my date for the evening. Natasha something or other. Hated to do it to her after meeting her at the gym and promising her she could show me around town.

I don’t need her or anyone else showing me around. Well, maybe one person, but I can’t seem to pull my head out of my ass to try and apologize to her. I’m afraid I’ll say something I’ll regret again, and in my position regret needs to stay as far away from me as I’ve been of Justice.

I step into the crowded bar called Whiskey Jacks. The few locals I’ve talked to say it’s the happening joint in downtown Boise, even on weekdays. The scene is not my usual. Especially at the moment, since half of the people in here have stopped talking, mouths dropping to the floor when I walk by.

My mood is shit, so I nod and smile. Shake a few guys’ hands and keep moving.

I came here to play football and seek revenge. It seems revenge has a funny and twisted way of blowing back on me. I’m experiencing it firsthand with every glimpse of the only woman I’ve ever loved. She’s everywhere.

Thoughts and dreams on the field. Hell, she’s even in my bed at night when I have my hand wrapped around my dick.

Seeing her is gutting me. It draws back so much pent-up frustration that there are days when I wished I hadn’t let my injury get as far as it did. If it didn’t, I might not be here right now, might not have admitted that my feelings for her are still alive and burning inside of me.

I knew my shoulder was causing me issues before it gave out on me. Little did I know that a flare-up of bone spurs caught in between my muscles would trigger my shoulder to freeze.

It happened so fast when I threw the ball down the field that I had no time to react before I was slammed into from both sides, heard it crunch with the impact from the ground. It shattered and ripped all the way up my neck. It fucked me all up.

Enough to where I had two surgeries within three months, multiple therapy sessions, and a backup quarterback who finished out the season and took our team to the playoffs. The guy respectively ended up taking over my position.

I was let go during negotiations. I knew I would eventually heal, but there was no way in hell I was sitting on the sidelines watching someone else do my job. It’s not in my DNA. Football is the one true love that’s never let me down. I get a natural high every single time I step on the football field. My mom always reminds me how I carried around footballs since I was one.

“Shit,” I grumble to myself, shaking my thoughts free. Justice Bexley has poisoned everything in my life. Now even thoughts of football take me right to her.

I suppose they should, being that she’s technically my boss and the sight of her gets my dick hard and raises my blood pressure to the roof the few times I’ve caught her watching us practice. She’s going to be involved in my life more than she was when we were dating.

The thought of her owning me in a way has me wanting to prove to her more than to myself that I’m ready to help this team, her family, and the fans bring us to the top.

“What can I get you, number eleven?” The busty redhead leans over the bar more than necessary, giving me quite the cleavage show.

I bite down on the inside of my cheek to bait the nasty words I want to spew back at her. Ever since the first press conference announcing my arrival, shit like this happens everywhere I go. After Justice left me, I loved it; hell, I welcomed it. Now, it’s old and quite pathetic.

Even the way some of the female reporters act drives me nuts. I’ve rolled my eyes more than I’ve answered their questions.

“Shit,” I mutter. My mind taking me to the press conference coming up. If I thought the first meeting was hell, then this one with her will be hell on damn steroids. Playing nice with the camera all the while sitting next to Justice. Her scent making me drunk and hard as fucking stone. Yeah, not a good sign for the press. No doubt in my mind they won’t feel and see the tension. Wouldn’t surprise me one bit if they aren’t circling around us like sharks just waiting to ask about our past either.

That ought to be a goddamn stampede gone wild.

“Crown and coke. Double.” I turn on the barstool pretending to study the crowd, hoping the woman behind the bar remembers she’s here to do a job and not pick me up. This will be my last drink for a long time. Hell, shouldn’t even be having it in the first place, but I’m only human, after all.

“Here you go, handsome.” She slides the clear tumbler full of dark amber liquid my way.

I pull out a twenty and slide it across the bar before going to another barstool in the corner. I take one pull of the drink feeling the whiskey burn all the way down. In an odd way, the fiery liquid calms my already hyped-up, fueled nerves.

That is until I see a flash of blonde hair shaking her sweet ass on the dance floor. My spine stiffens along with something else when my eyes stay glued to her backside. Fucking hell.

Once I focus in on the vision, I swear out loud to everyone and no one at all. “Son of a bitch.”

Those damn leather shorts are tight as hell, and those legs of hers that go on for days have always been my greatest weakness. Back then, she knew it and would expose them all the time. Justice is fit athletically. That sweet body of hers is combined with curves that were created to drive men wild. I stare at her long, exposed legs rocking with the song. “Hey, Blake.”

I hear a distant voice but ignore it, choosing to watch Justice dance with another woman. The friend's face is familiar. I know I should be able to place it, but I can’t focus on a damn thing except for that tight little ass.

Fingernails run along my shoulder, forcing me to look away from the dance floor. A petite little brunette this time. A damn gorgeous one at that. Voluptuous body and a face to match, but she does nothing to my rock-hard dick desperately trying to punch a hole through my zipper.

I’m so damn distracted I offer up a weak smile and glance back to the dance floor to see a man walk up behind Justice and grab her from behind. His hands are touching my favorite thing I’ve ever held in my hands. Her.

I see every single shade of red. It’s one thing to have to be around the woman, but it’s something totally different when another man is involved. Justice spins around, and the soon-to-be dead man wastes no time putting his mouth on hers.

Hell to the motherfucking no.

It’s the final straw that snaps me in half. A broken man seeing white-hot flashes scatter all around and not thinking rationally isn’t a good combination, but it’s a force so torrid I lose all sense of control.

I stand up, my angered body gently shoving the brunette next to me away. For one tiny second, I contemplate on guzzling my drink down. “Fuck it.” There isn’t enough alcohol to numb me right now.

In six long, powerful strides I’m on the dance floor next to them, and when the pencil dick asshole slides his hand down to her ass, I lose all sense of reasoning. I am pissed.

“Justice,” I growl and watch the man turn five shades of white from either whatever she said to him or from seeing me with my fists ready to knock him the fuck out.

Cascades of blonde locks tumble over her shoulder as she whips her head in my direction. She was in the middle of ripping the man a new asshole, I’m sure of it. She halted once she heard her name.

She lifts a perfectly sculpted brow, her anger directed toward me. Yeah, this feisty little princess and me need to have words.

I don’t say another word before grabbing her upper arm and leading her out of Whiskey Jacks. I don’t give two shits she may have left her purse behind either. I don’t stop until we are out on the sidewalk. The chaotic storm inside of me that just hit an all-time high doesn’t give a shit about anything right now except telling her off.

“What in the fuck?” I growl, nearing my face to hers.

“Goddamn right, it’s Liam. Quite the little stunt out there on the dance floor.” I dig my fingers into her hips as I tug her to me. 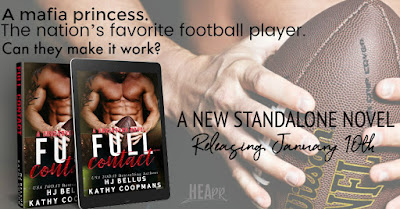 FULL CONTACT is a standalone, crossover novel between Pinky Promise by HJ Bellus and The Wrath of Cain by Kathy Coopmans.
CONNECT WITH THE AUTHORS!

Posted by Night and Day Book Blog at 1:50 PM