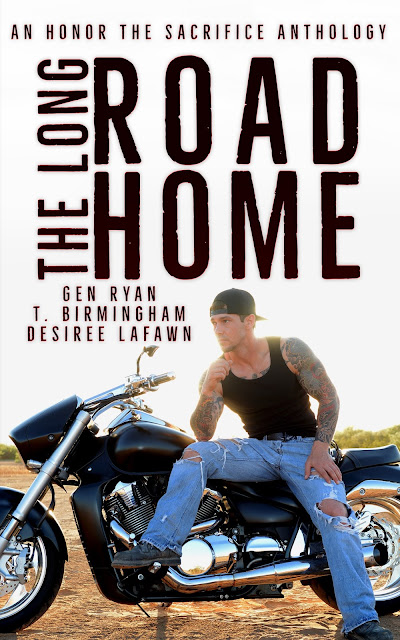 THE LONG ROAD HOMEan HTS ANTHOLOGYBilly DailyBy Desiree LafawnThe last time Max saw Billy, she threw a solid right hook to the region below his belt. He probably deserved it.But that doesn’t mean he’s not wary of the woman who punches first and asks questions later.Now that he’s come back to the one place he’s ever considered home, he gets to duck and cover on a (Billy F**king) Daily basis. Only, he’s coming to find Billy ain’t all that scary, even if she is god***ed crazy. Then again, he’s an ex-military, contract mercenary with a former drinking problem who’s doing a job for an old lady named Grandma Jean. A woman who wears a gun holster for her .38 Ruger under her yellow cardigan, takes in bikers, and calls her son, “that ding dong fruit of my lady bits.” So, honestly, Billy Daily might be the least crazy of all of them.Billy’s got secrets, though, and as much as Max is man enough to admit another kick to the nuts is something he’s lookin’ to avoid, he soon finds he’d take a punch to the family jewels any day if it means keeping Billy safe.Worth the FightBy Gen RyanBowen Daniels is feeling lost. He needs a purpose, something to get his head back in the game and his feet set back on a path he can live with. One that won’t damage his liver, maybe. Enter tough, sexy, Jordan Collins.The first time Bowen Daniels gets a look at Jordan Collins, she’s bending over in tight jeans and he’s thinking he may be in heaven.Too bad Bowen makes a terrible first impression that could cost him a chance at getting to know Jordan better. Because he sure as hell wants to get to know the spitfire woman who owns her own bike shop.But Jordan’s got her own troubles on the horizon, and Bowen knows the only way to show Jordan that not all guys are assholes is to prove to her that she’s worth the fight.A Terrible BeautyBy T. BirminghamKit Markham returns from war a changed woman. Unable to cope with what happened ten years earlier, she pushes away those who could help most. Lee Devereux has his own share of war wounds, but none worse than the burden he’s taken on to see that the Kit he once knew finds herself again. He’s got his work cut out for him, though. It’s been over two years since she returned home, and Lee still can’t find the girl he once loved in the woman who’s become so lost.When local soldiers, veterans, and their families start getting threats from a team of blackmailers, Kit has to make a choice. Let Lee and her family be a part of her healing or keep her secrets and risk losing herself completely.
#teamKruse #Krusehasyoucovered
-

Posted by Night and Day Book Blog at 8:50 AM