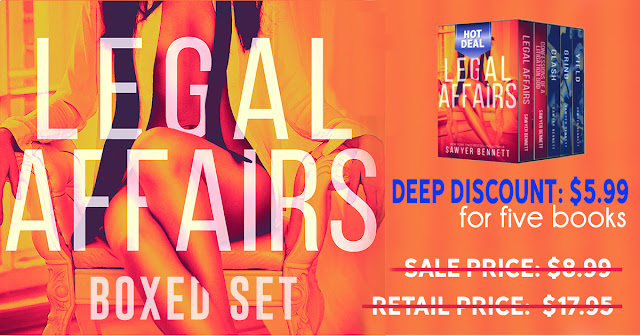 The Legal Affairs Boxed Set by Sawyer Bennett is #LIVE and #availablenow for the special release week pricing of just $5.99!!! This price won't last long, so grab it now before it goes up to $8.99 (retail price is $17.95).

→ Legal Affairs: McKayla’s Story—Two days ago, I had a torrid one-night stand with a stranger. Today, he’s my new boss. Matt Connover is all kinds of forbidden temptation wrapped up in a deliciously wicked package, and he’s made it clear… he’s only interested in sex. Between you and me, I’m afraid my heart won’t survive these Legal Affairs.

→ Confessions of a Litigation God: Matt’s Story—My name is Matt Connover. I am a Litigation God. Other lawyers quake before me. Women crawl on their knees just to spend the night in my bed and when I’m finished with them, I walk away without a backward glance. I am well satisfied with my life and there isn’t a damn thing I’d change about it. That is, until McKayla Dawson came along.

→ Clash (Book 1 of Cal and Macy’s Story)— It might be fair to say that I despise Macy Carrington. We clash in a battle of wills every time we’re around each other, and yet… I still fantasize about being lodged deep within her body.
I have never encountered someone that grates me the way Cal Carson does. Any interaction with “Saint Cal” ends in a verbal clash of epic proportions, and yet… there’s no one I’d rather have in my bed than him.

→ Grind (Book 2 of Cal and Macy’s Story)— Macy Carrington is not the woman I once thought her to be. I’ve done things with her that would never have crossed my wildest imagination, and I can’t ever seem to get enough.
Cal Carson is not the man I once thought him to be. He is my fantasy. But no matter how hard Cal tries to grind me down, my heart and secrets are mine and mine alone.

→ Yield (Book 3 of Cal and Macy’s Story)— Macy Carrington is broken. The strong, beautiful woman that I’ve unwittingly fallen in love with is all kinds of broken from a secret that she has carried for far too long. A secret so dark, she has gone to great lengths to protect it. A secret that I’m terrified will one day rip her away from me. If she would only yield to me completely, I know I can set her free. 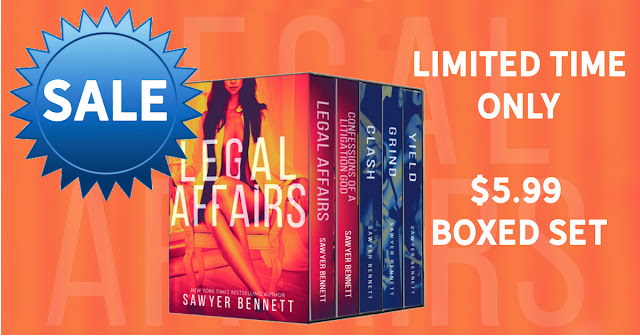 Posted by Night and Day Book Blog at 6:14 AM