The Doctor will see you on August 29th.
Keep reading for an excerpt! 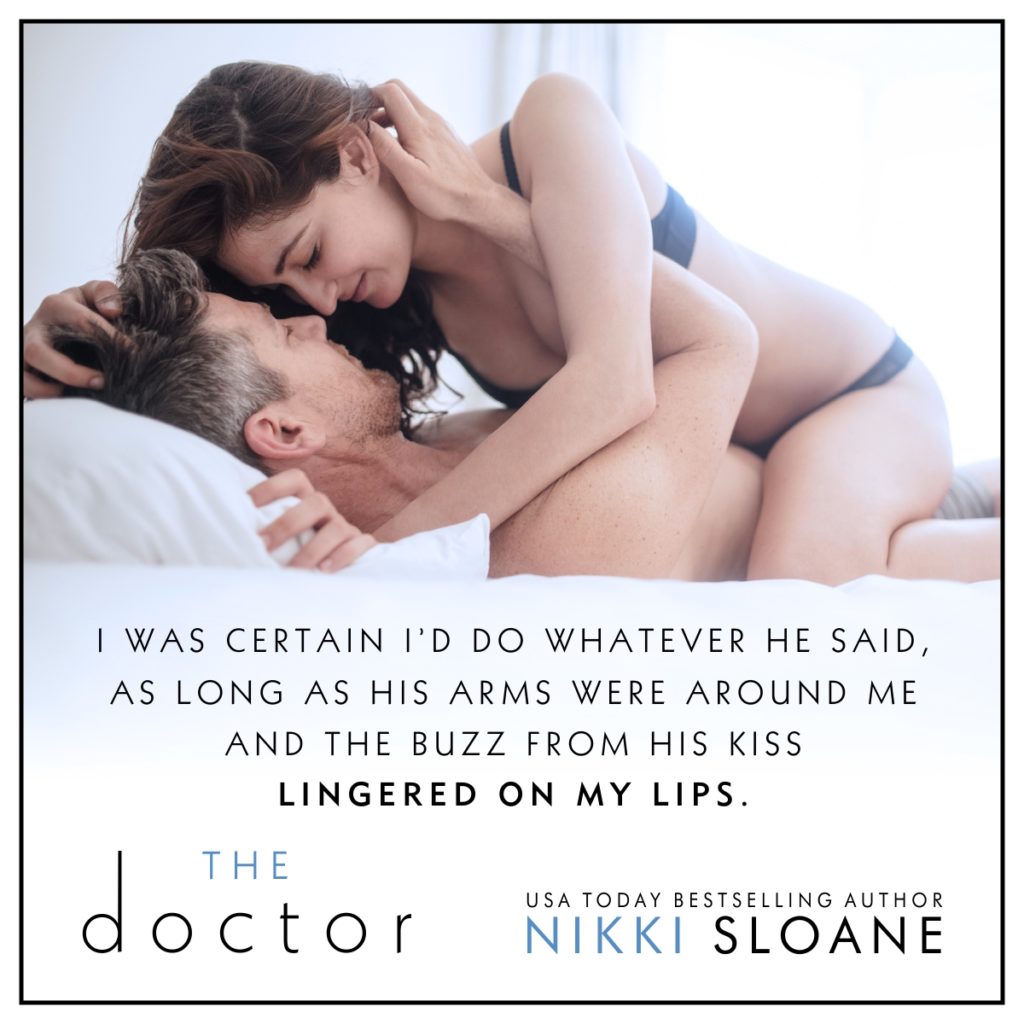 ADD TO YOUR TBR → http://bit.ly/2u5LxIR
FOLLOW Nikki on Bookbub → http://bit.ly/2qWuztn
For years, he was a part of my life. I watched him rush to the hospital countless times, his beautiful surgeon hands racing to save lives.
After all this time, I can’t escape the truth.
I want Dr. Lowe.
Lust chokes each moment we’re together. He promises to fulfill my fantasies—every dirty, naughty desire we can dream up.
Only, I can’t have him.
He’s confident. Experienced. Seductive.
And he’s my ex-boyfriend’s father. 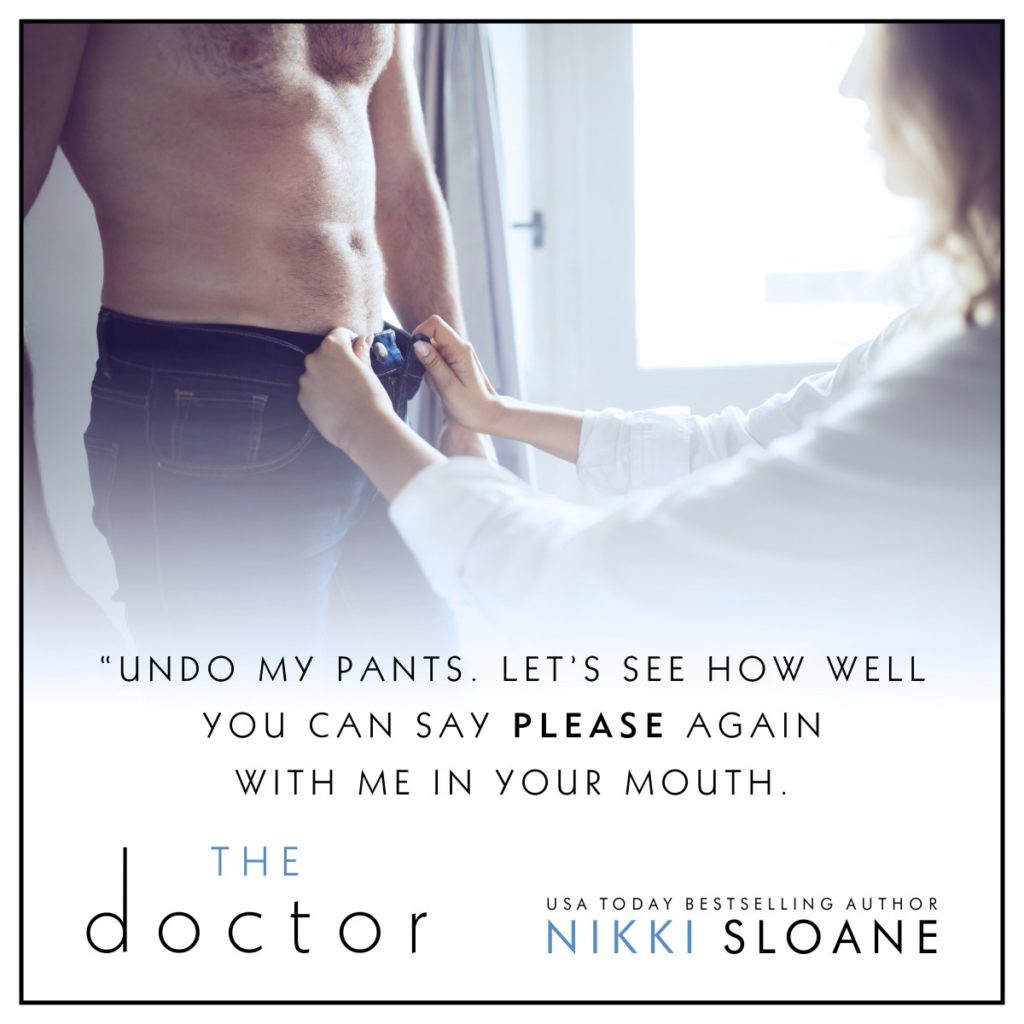 EXCERPT:
It was a nicer waiting room than where I’d just been, but much smaller. Only enough room for six people or so. This had to be the place where doctors delivered their post-op summary to families.

I turned to face him, and all the air whooshed from my lungs.

Greg was essentially wearing a suit. He wore black dress pants, a white collared shirt and a cobalt-colored tie. His suitcoat was fitted and white, and he completed the look with a turquoise stethoscope slung around his neck. My gaze traced the blue lettering over his right breast.

It didn’t matter that he had faint lines around his eyes hinting at his fatigue, or that his normally perfect hair looked disheveled, as if he’d run a hand through it one too many times. It didn’t matter because he looked fucking perfect. My dirty doctor fantasy come to life.

And he gazed back at me like he wanted to eat me whole, which was more than fine with me. He sauntered over, and his confidence seemed to build with each step, widening his wicked smile.

His voice was deep and sinful. “What seems to be the problem?”

“You’re flushed. Breathing hard.” He seized my wrist, pressed his index finger to my pulse point, and peered down at his watch, counting the seconds. “Your pulse is elevated.”

I had no idea my wrist was an erogenous zone, but in Greg’s hands, every inch of my skin felt that way. I swallowed a breath. “I’m having a reaction to something.”

God, his expression was corrupt and victorious as he walked me backward toward a wall. He feigned concern. “Any idea what’s causing it?”

The second the words left my mouth, we burst into flames. His lips slammed against mine at the same instant my back hit the wall. His hands were on my waist, then under my shirt, sliding over my belly and skimming upward. I clenched the lapels of his coat as our tongues tangled with each other, battling for control. He won, of course.

It made sense that our kiss was electric because I was a live wire tonight. His broad chest flattened against me, his hands molding to my bra-covered breasts while he pushed me against the wall. I tore my mouth from his and turned my head to the side so I could drag air into my lungs, and his hot, wet mouth latched onto the sensitive spot below my ear, biting and sucking until I let out a moan.

It was wild what we were doing, and how fast we attacked each other, but the where we were doing this was craziest part of it. He didn’t seem to have any concerns though. “Undo your pants,” he rasped into my ear. “I want to check and see how severe this reaction is.”

“Oh my God,” I gasped. Without thinking, my hands moved to follow his command. He pulled his lower body away from mine, just enough to allow me to do it. The snap of my jeans popped open, and I couldn’t get my zipper down fast enough. Should I be worried about someone catching us?

I wasn’t. I trusted him. Greg wouldn’t put either of us in a position for that to happen, and his calm, focused expression reinforced it. He looked absolutely in control, both of me and the situation.

His dark eyes sharpened on mine, studying my response while he slid his hand down the front of my panties. My lips parted as his fingers found me hot and wet for him. What did I look like, clutching his arms right above his elbows as his fingers twitched on my swollen clit? I shuddered with pleasure. Had my pupils dilated? Could he tell my heart rate was racing through the roof?

His lips peeled back in a smug smile. “That is quite the reaction.” Those skilled fingers stirred me further, and I tightened my grip on his arms, biting off a louder moan. Shit, his touch was magic. It lit me up. He could tell too, because his eyes burned with enjoyment. “And you’re still not sure what’s causing it?”

He liked this scene as much as I did. Maybe more. 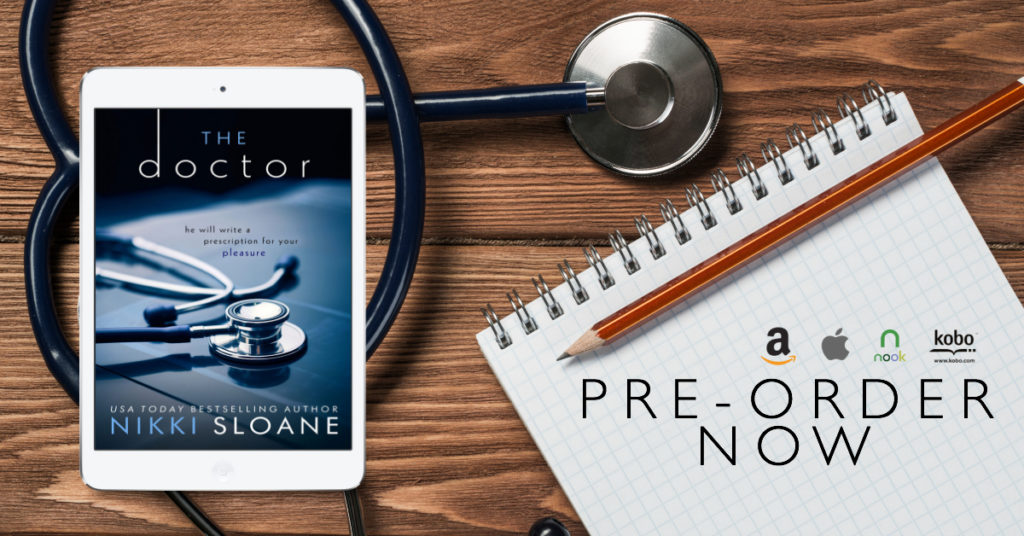 About the Author:
Nikki Sloane landed in graphic design after her careers as a waitress, a screenwriter, and a ballroom dance instructor fell through. For eight years she worked for a design firm in that extremely tall, black, and tiered building in Chicago that went through an unfortunate name change during her time there. Now she lives in Kentucky and manages a team of graphic artists. She is a member of the Romance Writers of America, is married with two sons, writes dirty books, and couldn’t be any happier.