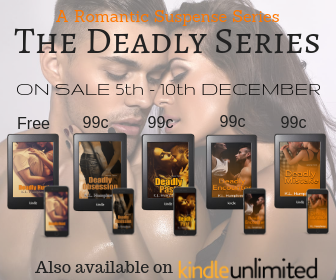 All available on Kindle Unlimited

★★★Start at the very beginning with Deadly Hunt★★★

A Middle East terrorist is loose in an American city and the death toll is rising. A group of former Army soldiers are determined to put a stop to him.
Sophia Dallas has recently been discharged from the Army after suffering at the hands of the enemy. On her journey to healing, she has finally started to live her life, but the past never really stays in the past.

Nathan Slade, a former FBI agent, now owns his own P.I business, has taken on a case that could make or break him. In all the chaos, he meets the love of his life.

Lives will be lost, leaving pain and suffering in the wake of destruction while Nathan and Sophia learn the hard way that the future is never promised -especially theirs