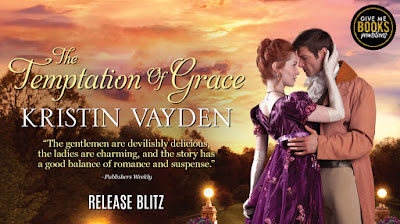 Title: The Temptation of Grace

An elite
gentleman’s club is no place for a London debutante. But what happens at
Temptation stays at Temptation . . . or does it?

Dogged by gossip and scandal, Ramsey Scott, Marquess of Sterling, is the last
man who should stand guard over lovely Miss Grace Morgan, much less fall for
her. When the innocent’s first outings of the season land her in Temptation,
the private club Ramsey manages, he longs to take her in his arms and keep her
there, if only his past would allow it. Their friendship will have to suffice—but
as Grace blooms in society, Ramsey feels her slipping from his grasp. Until she
lures him into his greatest temptation yet . . .

She should never have come to his office unattended. But how else was Grace to
get Ramsey’s romantic attention? Yet now she is left waiting for a proposal
that may never come—and wondering if Ramsey’s vexing propriety will force her
to marry another . . .

Purchase Links
AMAZON US / UK / CA / AU
B&N / KOBO / APPLE BOOKS
GOOGLE PLAY
Excerpt
“Don’t.” It
was a single word, but it carried a wealth of meaning.
Miss
Grace blinked, tipping her head just a fraction of an inch. “Pardon?”
He
shook his head slightly. “Don’t. I know what you are thinking, and it’s wrong.”
A
bit of the spark he’d seen earlier flared to life in her eyes, and it pleased
him. “I wasn’t aware you were a mind reader.”
“I’m
not, but I am quite intuitive on certain things, and this is one of them.
You’re thinking you don’t belong, that you knew you’d do something stupid like
this, and that you are disappointing Heath—Viscount and Lady Kilpatrick.” He
finished, lifting his chin, daring her to contradict him.
Her
defiant gaze flickered to the ground and he noted the way her jaw clenched.
There was a slight sigh before she raised her gaze to his. “Am I wrong to think
those things?”
He
mentally applauded her willingness to be honest. “Yes. While it was unfortunate
for you to . . . do whatever you did. I rather missed the whole mess, but only you
can let it define you, Miss Grace. And I, for one . . .” He took a step
closer to her. “Rather thought you stronger than that.”
He
issued the challenge, offering the opportunity to rise to the occasion rather
than offer sympathy.
Sympathy
was for fools, for those too weak to accept the challenge of rising above. And
was quite certain that Miss Grace needed the gauntlet thrown, rather than a
soft word and kind pat.
Like
a pet Yorkie.
Ramsey
gave a slight shiver at the thought.
“I
just made a cake of myself,” she retorted with enough heat to warn him, but not
loudly enough to draw attention.
“I
know.”
“And
yet, you want me to waltz right out there—”
“I
wouldn’t waltz if I were you; that might draw attention. Most
people simply walk, but . . .” He hitched a shoulder.
She
glared, clearly not appreciating his attempt at humor.
Ladies
were so irritatingly literal when they were angry. Annoying, that.
“Well,
what are you going to do? Hide? Let them win? Cower? I guarantee that is
exactly what they think you should do, and then they will whisper behind your
back, and then to your face.”
“They’ll
whisper regardless.” Miss Grace shrugged, giving a very unladylike eye roll to
punctuate her statement.
Even
if it was unladylike, Ramsey had to agree with the gesture. London elite had
earned many an eye roll from him as well. “Yes, but the question is . . .” He
took a step forward, met her gaze with a frank on of his own, and continued.
“What do you want them to whisper about? How you ran, or how you had the
bravery to rise above?”
Her
green eyes sparkled, then kindled with what looked suspiciously like courage,
but then she glanced down to the floor, hiding his view of her expression.
The
first measures of the waltz started playing, and Ramsey turned to the ballroom,
watching the dancers start to assemble in the middle of the floor.
Before
he could second-guess his instincts, he held his hand out.
Miss
Grace glanced from his hand, to his eyes, then back, her brows arching in a
question.
“Or
was I wrong? Are you not brave enough?” He challenged.
It
wasn’t a second later than her hand was firmly placed on his arm, following him
from the alcove into the room.
As
they stood in the frame of the waltz and began to melt into the other swirling
dancers, it was only then that Ramsey realized that he had given the London Ton
something entirely different to whisper about.
Himself.
Author Bio

Kristin's inspiration for the romance she writes comes from
her tall, dark and handsome husband with killer blue eyes. With five children
to chase, she is never at a loss for someone to kiss, something to cook or some
mess to clean but she loves every moment of it! Life is full—of blessings and
adventure! Needless to say she’s a big fan of coffee and wine…and living in
Washington she’s within walking distance of both!

Posted by Night and Day Book Blog at 9:25 AM