Billionaire CEO Alexander Wolfe has spent years putting in 120-hour weeks and adding zeroes to his net worth. But lately, work has left him feeling burnt out and uninspired. Then he is given the chance to go head-to-head with a
legendary corporate raider and the man he’d idolized his entire career. He seizes the opportunity, immediately jumping on a plane for Barbados to close the deal in person. If he’s successful, it’ll be the biggest win of his career.

He had no way of knowing that meeting a mesmerizing beauty would have the power to derail everything...

Calypso Sterling has no time for men who value her beauty over her intellect. Instead, she focuses all her energy on her studies and career aspirations. But when her home—and a closely guarded family secret—is
threatened, she’s ready to defend all she holds dear.

She had no way of knowing a handsome stranger had the power to take away everything she’d ever loved...

This standalone, workplace/ enemies to lovers romance features characters from Everything’s Better With Kimberly, is full of alphas and steam and has NO cheating.

This is the novelized, extended version of the previously published novella of the same name.

“Hey, Mia Hamm,’’ a deep rumbling voice called from above
me.
I turned in the direction of the voice. The handsome man I
saw yesterday playing football with his son was calling to me from the second-floor balcony.
“Who?”
“Mia Hamm. The famous soccer player.”
“I know who Mia Hamm is. I’m not her, and you’re in Barbados where we call it football.”
“Well, I don’t know your name. Why don’t you tell me what it
is so I know what to call you and then you can tell me where you learned to play football like that.”
“I think you’ll find that most people who grew up in the
Caribbean can pass a football with some skill. I’m not special.”
“I don’t know if I agree with that.” He grinned, and I felt
myself flush. “And you still haven’t told me your name.”
“Where are your wife and son?” I asked, deciding to nip this
little game in the bud.
His brow furrowed in confusion before realization hit.
“What? No. She is not my wife and Philip is not my son.”
Something that felt suspiciously like hope caused my heart
to flutter at his words, but he was probably lying.
“That little boy looked exactly like you.”
“Hey, I’m not saying he’s not a good looking kid.” His grin
returned, and so did my flush. “He’s just not my kid.”
“Well, his mother seemed interested. Why don’t talk to her
about soccer?”
“I’m not interested in his mother.” He gave me a pointed
look, his grin still firmly in place.
My stupid heart fluttered again.
“I’m already taken,” he said.
The fluttering stopped.
“But the problem is, she won’t tell me her name.” He tucked
his bottom lip between his teeth, still grinning.
And the fluttering returned. A deep breath helped me calm
myself and regain focus before I pressed the elevator button again, knowing that it would do nothing to make the elevator come faster.
I glared at him and rolled my eyes. He was leaning over his
balcony waiting for an answer.
“No,” I said finally.
“No, what?” he asked.
“Whatever you want. Whatever you think this is. The answer
is no.”
“It can be whatever you want it to be.” That line would’ve
been incredibly sleazy from anyone else, but he made it sound so sincere and almost convincing that it was clear I needed to keep my distance from him, no
matter how charming he was and no matter how long it had been since I felt a man’s hands on my body.
“Good,” I said. Mercifully, the elevator arrived at that
moment, and I stepped inside. “Nothing it is.” 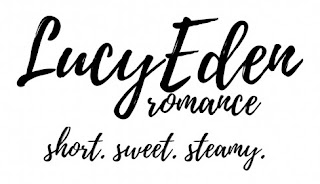 Lucy Eden is the nom de plume of a romance obsessed author who writes the kind of romance she loves to read. She’s a sucker for alphas with a soft gooey
center, over the top romantic gestures, strong & smart MCs, humor, love at first sight (or pretty damn close), happily ever afters & of course, dirty & steamy love scenes.
When Lucy isn’t writing, she’s busy reading—or listening
to—every book she can get her hands on— romance or otherwise.
She lives & loves in New York with her husband, two
children, a turtle & a Yorkshire Terrier.