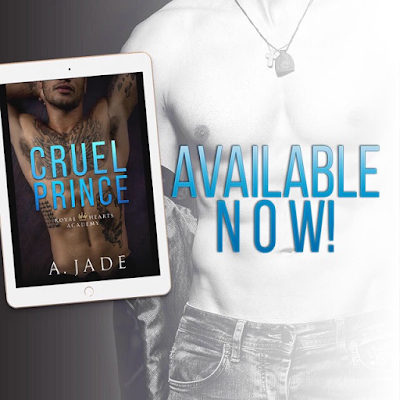 ★★★ NEW RELEASE ★★★
CRUEL PRINCE, the first STANDALONE book in the Royal Hearts Academy Series by Ashley Jade is LIVE and FREE in Kindle Unlimited!!
AVAILABLE NOW!!
FREE in Kindle Unlimited!
Amazon US: https://amzn.to/30l209E
Amazon UK: https://amzn.to/2XFs5Pb
Amazon CA: https://amzn.to/2XCn4eU
Amazon AU: https://amzn.to/2XHo9xm
Blurb:
Welcome to their kingdom...
I never thought I'd step foot in Royal Manor again.
But four years later, here I am...back to finish my senior year at Royal Hearts Academy.
And forced to face Jace Covington.
My first friend. First crush. First kiss.
The one I left behind.
Only—he isn't the same boy I gave my heart to.
This new Jace is as cruel as he is gorgeous.
And he's determined to make my life a living hell.
Along with the rest of his glorified family and crew of tyrants.
They expect me to worship the ground they walk on like everyone else, but I'd rather eat dirt.
If Jace Covington wants me gone...he'll have to try harder.
Because I've never been the kind of girl to play by the rules.
WARNING: Royal Hearts Academy is a New Adult/High School series of standalones filled with drama, a touch of angst, and boys who are bad to the bone.
This series is recommended for mature readers due to graphic language and sexual content.

Posted by Night and Day Book Blog at 5:47 AM