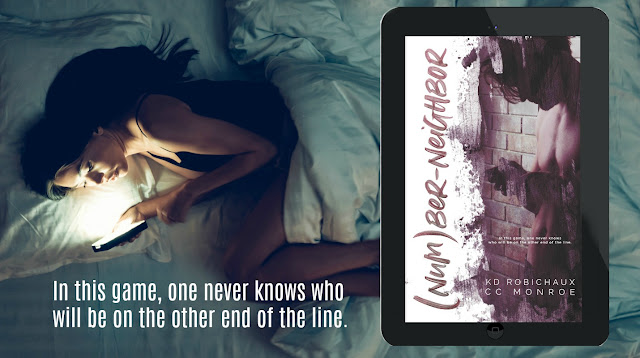 Blurb:
Number Neighbor—A social media game in which a person texts the phone number one digit higher or lower than their own.

After watching, stalking, obsessing over Ivy—the raven-haired beauty with eyes as green as the clinging vine she’s named after—it’s the perfect opportunity for Owen to finally speak to the woman he’s claimed as his from afar.

Gymnophobia—The fear of nudity. For Ivy, it stems from the thought of being vulnerable, whether it be physically or emotionally. It’s caused her to be alone, intimately unavailable, and the only way she feels safe is attraction she feels from a distance.

But then she receives her number neighbor’s unexpected text.

Will being open with the stranger help build her confidence enough to finally take charge of her life and go after what she wants? Or should she be worried about the man who suddenly popped into her world, the timing seeming too good to be true?

After all, in this game, one never knows who will be on the other end of the line.

99c everywhere ebooks are sold!
Number Neighbor will be available WIDE for one week only.
It will then be moved to KU on November 7th.💋,
KD Robichaux & CC Monroe 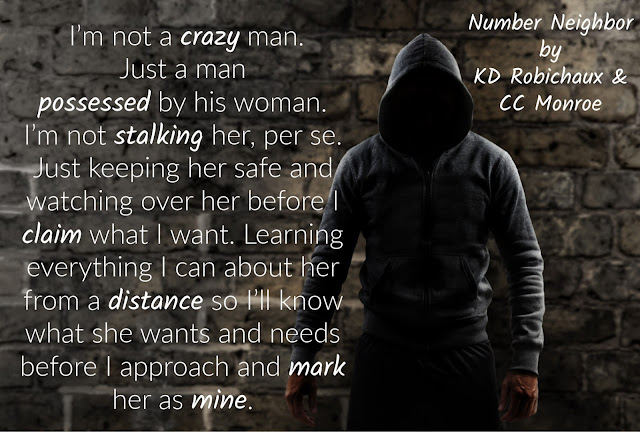 Gails Review
Ummm WOW!! what can I say.. this book was phenomenally good!!

Number Neighbor—A social media game in which a person texts the phone number one digit higher or lower than their own. <-- sounds kinda crazy but hey.. why not.. So what happens when sweet Ivy gets a call from her Number Neighbor?

Owen has been obsessed with Ivy.. watching, stalking, and when the opportunity to finally speak to the woman he’s claimed as his from the get go comes to pass.. he jumps on it.

Ivy knows what she wants.. and that is her boss.. but she cant just go to him and throw herself at him can she? So when Ivy gets her Number Neighbor and his name is Hunter.. can he pull her out of her shell.. get her to go after what she wants?

thanks for the amazing read!!

This was a very fast paced and extremely good book! It will keep you on the edge of your seat!!