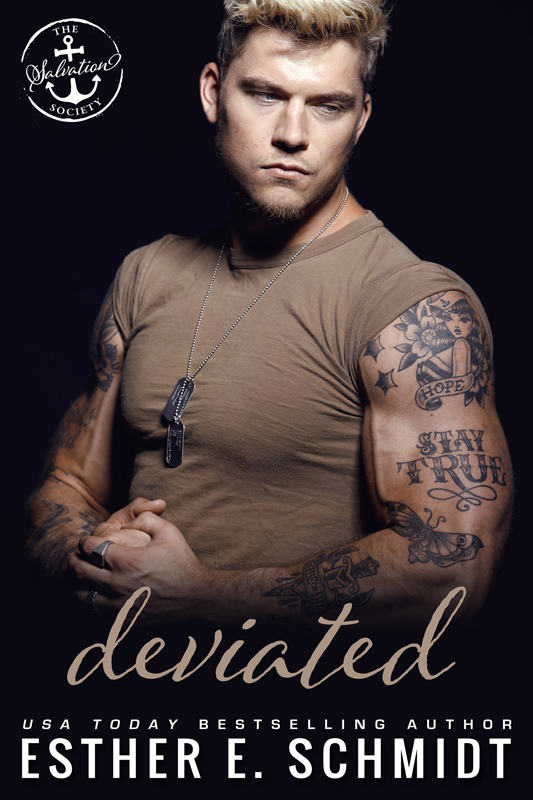 Photographer: Wander Aguiar, wanderbookclub.com
BLURB:
They call her Princess. Growing up in a Motorcycle Club isn’t easy; growing up as the daughter of the president of the MC molded Esmee into the reckless and hardheaded woman she is. A complete dynamite, fighting for her place in a man’s world.
As a CIA agent, Cullen thrives on law and order. When he is charged with investigating the MC, he quickly realizes the Princess will be his way in. Yet, once he’s infiltrated, she leaves him no other option but to deviate from the path of law and order, and to see justice within reason.


ANNOUNCEMENT & COVER REVEAL
Esther E. Schmidt is excited to announce that she’s joined an incredible group of authors to write in Corinne Michaels’ Salvation Society! Her book “Deviated” will be written within the bestselling Salvation Series world, and she can’t tell you how thrilled she is to be part of it! Esther will bring you glimpses of some of your most beloved characters from Corinne’s world, intermixed with her own “Broken Deeds MC” world. It’s an epic crossover that you’re sure to devour!

We’re celebrating the announcement in the Salvation Society Reader Hangout, and we want you to join us! There will be loads of information to come, including Esther’s release information! So that you don’t miss out on all the world news, make sure you join the mailing list.

Below you’ll find everything you need to keep in the know. Plus, we have a pretty awesome giveaway just for you! If you haven’t read Corinne’s Salvation Series, we highly recommend you do! Esther’s book is written in that world and some of Corinne’s fan favorite characters will make appearances!

To help get you started, Corinne has given me copies of her duet Beloved and Beholden FREE. To get yours, click the link below. I can’t wait for you guys to get your hands on these books!