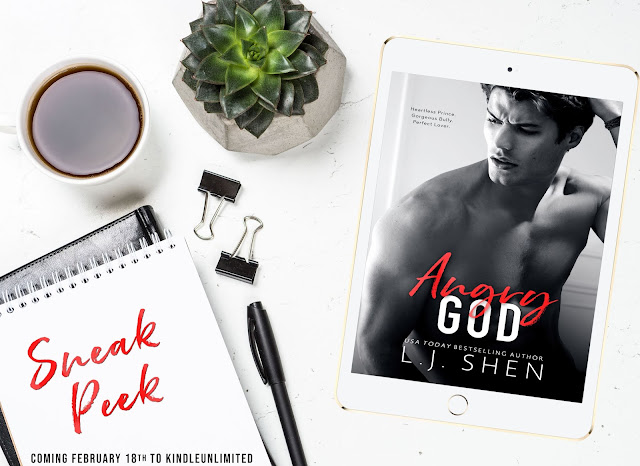 “The artistry that L.J. Shen is gifted with blows me away every single time, but Angry God was a whole new dimension.”
- Amo Jones, USA Today bestselling author

We were told we were a cut above the rest, the future of artists all over the world. We had the talent, the status, the money, and the opportunity. But if we were silver, Vaughn Spencer was gold. If we were good, he was brilliant. And when we shone? He gleamed with the force of a thousand suns, charring everything around him.
It was like God had carved him differently, paid extra attention to detail while creating him. His cheekbones were sharper than scalpel blades, his eyes the palest shade of blue in nature, his hair the inkiest black. He was so white I could see the veins under his skin, but his mouth was red as fresh blood—warm, alive, and deceiving.
He fascinated and infuriated me. But just like everyone else, I kept my distance from him. He wasn’t here to make friends. He’d made that clear by never attending the food hall or any of the social functions.
Another thing Vaughn had and I didn’t? My father’s admiration. I didn’t know why the great Edgar Astalis fawned over some boy from California, but he did, nonetheless.
Papa said Vaughn was going to do something special. That one day, he would be Michelangelo big. I believed him.
And so, I hated Vaughn.

Be notified first when Angry God is live: http://bit.ly/36MnmAQ

Synopsis:
Vaughn Spencer.
They call him an angry god.
To me, he is nothing but a heartless prince.
His parents rule this town, its police, every citizen and boutique on Main Street.
All I own is a nice, juicy grudge against him for that time he almost killed me.
Between hooking up with a different girl every weekend, breaking hearts, noses and rules, Vaughn also finds the time to bully little ole’ me.
I fight back, tooth and nail, never expecting him to chase me across the ocean after we graduate high school.
But here he is, living with me in a dark, looming castle on the outskirts of London.
A fellow intern. A prodigal sculptor. A bloody genius.
They say this place is haunted, and it is.
Carlisle Castle hides two of our most awful secrets.
Vaughn thinks he can kill the ghosts of his past, but what he doesn’t know? It’s my heart he’s slaying.

Posted by Night and Day Book Blog at 8:02 AM