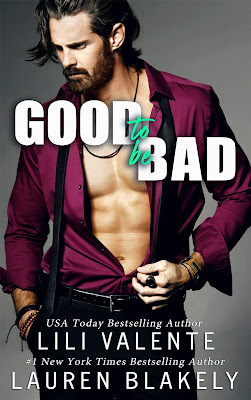 GOOD TO BE BAD, a rivals-to-lovers, sexy standalone romance in the Good Love series from bestselling authors @laurenblakelybooks and @AuthorLiliValente is coming MAY 11th!! Get ready to fall hard for this swoony Brit and his feisty rival!

Blurb:
It was only supposed to be one time.

But that red-hot one night stand from the party?

The sexy man in the suit who gave me more Os in a few hours than I've had in a year?

Turns out my charming British stranger is keeping a little secret.

He's as much of a whiz in the kitchen as he is in the bedroom and soon we'll be going head-to-head in NYC's biggest bake off.

My one-time lover is now my enemy. I vow to loathe him for all eternity, though that would be easier if I wasn't dying to get naked with him again.

But the more I learn more about my rival, the more I suspect he just might be everything I've wanted...

GOOD TO BE BAD is a sexy standalone romance in the Good Love series!

Posted by Night and Day Book Blog at 8:21 AM