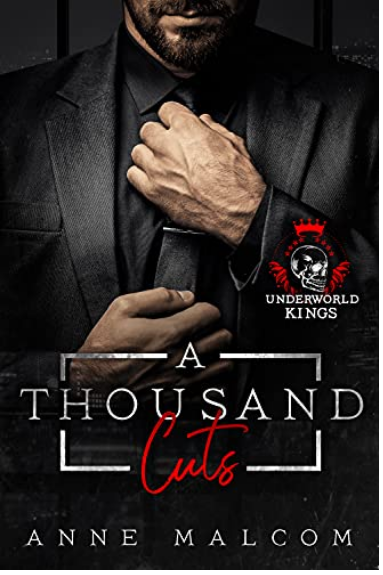 A Thousand Cuts from Anne Malcom will be here November 25th!  Are you ready for this Dark Mafia Romance from the world of the Underworld Kings?
BLURB:
I did not set out to be a mafia wife.
I came into this home, into this life as a hostage.
He was nothing more than my captor.
A murderer. A criminal. A monster.
Until he was more than that.
He took me as payment for a debt. Nothing more than a pawn in an intricate game of lies, manipulation and death.
He saw the darkness in me. It called to him. Just like his wretched soul called to me.
He was king of the underworld.
And he wanted me to be his queen.
But despite how much the most depraved parts of me wanted that crown, I knew I only had one option.
Take the Catalano family down.
Or die trying.
PREORDER HERE
AMAZON US:  amzn.to/3B9dcsK
AMAZON UK:  amzn.to/3l9XAQf
AMAZON CA:  amzn.to/3FjiPHu
AMAZON AU:  amzn.to/3oBD8d8
ADD A Thousand Cuts to your TBR:  https://bit.ly/AThousandCutsTBR