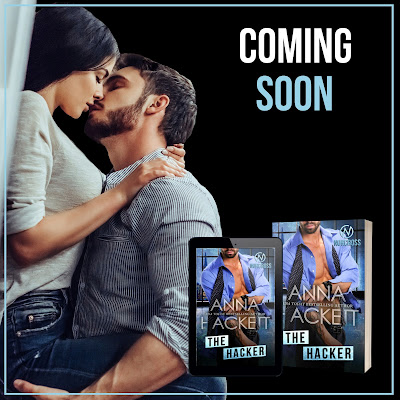 The Hacker by Anna Hackett is coming October 12th!

A new action-packed romantic suspense in the Norcross Security series.

She’s accidentally pregnant and someone is trying to kill her…and now her one-night-stand is her fierce protector.

Helicopter pilot Maggie Lopez is focused on building her helicopter and drone photography business—and she has the loans to prove it. She takes one night off to trade her jeans for a designer dress, and attend a fancy gala…and ends up spending a very steamy night with her panty-melting crush—Ace Oliveira. He’s tall, sexy, and the guru of all things tech at Norcross Security.

Ace Oliveira’s life is just how he likes it. After years protecting his country at the NSA, he now puts his special computer and hacking skills to good use at Norcross Security. He gets paid well. Has good friends. Enjoys the hell out of his carefree bachelor lifestyle. Relationships and kids are not on the cards for him—ever. He has his reasons.

But then feisty, saucy Maggie—who snuck out of his bed like a thief—drops a bombshell.

Before they can even process the surprise pregnancy, it becomes clear someone is trying to kill Maggie. A series of deadly accidents are all centered on her, and Ace will do whatever it takes to keep her safe. With the men of Norcross at his side, he’ll track down a killer, fight his own demons, and convince skittish, independent Maggie to fall in love with her baby’s daddy.﻿

Add The Hacker to your Goodreads TBR > https://bit.ly/3AIaDha