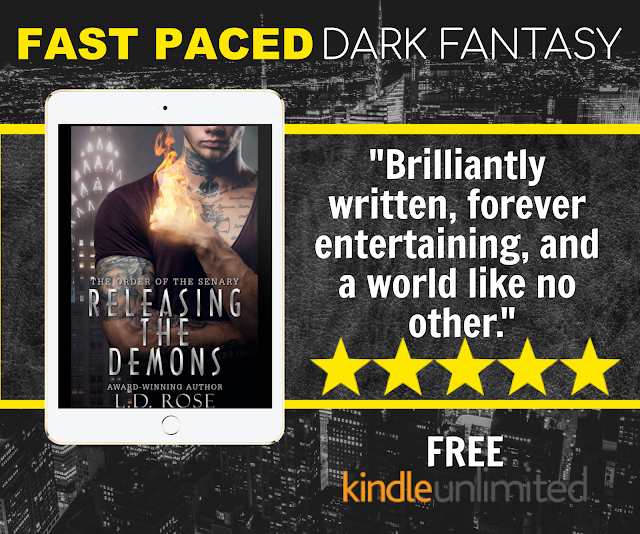 RELEASING THE DEMONS, by L.D. Rose an award-winning dark paranormal romance in The Order of the Senary series is FREE ON KU

He’s out to set the world on fire.

She’s the only one who can tame him.
BLURB
Blaze Knight has been through hell and back, but the nightmares aren't over yet.
Five years after being maimed and tortured by vampires, Blaze is still picking up the pieces of his shattered life. As a genetically engineered hybrid mercenary, his mission is to protect what's left of humanity. When his tormentors return to the Bronx gunning for Blaze's blood, he's forced to face the demons of his past. Hell-bent on revenge, he seeks the help of Valerie Medeiros, an NYPD detective who manages to steal his heart and save his life in more ways than one.

Motivated by her sister's gruesome death, Valerie's life goal is to bury every vampire in the ground where they belong. She has a hard time trusting anything with fangs, yet she falls headlong into Blaze's life, a life full of darkness and horror she can't even begin to fathom. The bodies are stacking up, but Valerie can't let go of this hybrid, a beautiful monster filled with pain, rage, and passion unlike anything she's ever known.

In a world where the line between good and evil is blurred, Blaze and Valerie will find danger at every turn, risking everything they've come to know and love, including one another.

Get the series FREE on KU mybook.to/releasingthedemons

Posted by Night and Day Book Blog at 6:06 AM