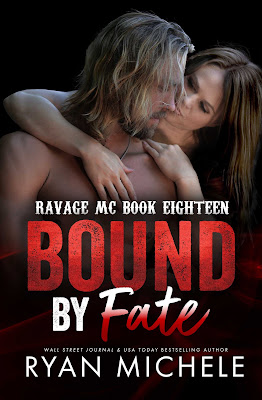 #CoverReveal #MCRomance
Bound by Fate (Ravage MC) Bound Series by Ryan Michele is releasing 2/22/22
Apple: https://apple.co/3wDDvpJ
Amazon: https://amzn.to/3G8BrtD
Kobo: https://bit.ly/3DivMQn
B&N: https://bit.ly/3qbQ72d
Amazon UK: https://amzn.to/3qjiqzu
Amazon AU: https://amzn.to/3qjmpvS
Amazon CA: https://amzn.to/3n35V9v
Cover Designer: Cassy Roop from Pink Ink Designs
Photographer: Shauna Kruse from Kruse Images & Photography
Models: Kristen Lazarus-Wood & Clint Lewing
Oh what a wicked web we weave...
Marine, Benjamin Dryerson has been to war and knows the ugly side of freedom. It changes a man leaving him knowing what is important in life.
He’s found peace in the Ravage Motorcycle Club and the family that comes with the cut.
And her…
Katie lives in a constant war of her own, a battle of wills against herself with no escaping.
She knows the cruel side of freedom. What most people take for granted, she’s had to claw for a sliver of good.
She’s far too damaged to let the war rage on.
Guilt consumes her and the only comfort she’s ever known was wrapped in his arms.
Second chances don't happen for people like Katie, no matter how desperately she wants it. Or how much Dryerson desires to be the one to give her a new life.
Fate intervenes, pulling them together in a combustible way they never saw coming.
Neither did the club. Friend or Foe? Only one way to know.
The Ravage MC way…
** Bound by Fate (Bound #9) (Ravage MC #18) is a standalone full-length novel. **
Posted by Night and Day Book Blog at 11:12 AM