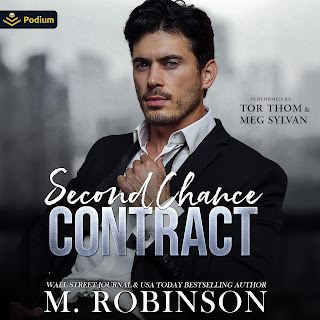 🎶🔥HOT NEW AUDIOBOOK ALERT🔥🎶
SUPER excited to announce M. Robinson’s Second Chance Contract is LIVE on audio!
➜ Angst fest
➜ Push and pull second chance romance
➜ Billionaire Hero
➜ CEO/Publicist office drama
➜ My angst heart has clenched so many time writing this book
➜ Best friend’s little sister
➜ Enemies to lovers
Second Chance Contract
Narrated by: Tor Thom & Meg Sylvan
From Wall Street Journal and USA Today Bestselling Author M. Robinson comes a standalone best friend’s baby sister, second chance billionaire romance.She was my best friend's little sister, which meant she was off limits, but I couldn’t help myself. I never could when it came to her, and in the end, I left town and made something of my myself.Ten years later and I was one of the richest men in the world. I had everything I ever wanted except for her. Little did I know, life would give me a second chance to make things right by her. She was suddenly my publicist, treating me as if I was nothing more than another client when I stole all her firsts.Including her heart.I needed to take matters into my own hands, making her an offer she couldn’t refuse.For the next ten days, she signed a contract stating…She was mine.
Start listening here: https://geni.us/SecondChanceContract
Posted by Night and Day Book Blog at 6:49 AM